STC Berlin hosted this year’s International Forum (IF) and it was “sehr gut” – that’s “very good”, as Alan discovered while attending with Ronan. “While many of the STC’s cities across the world meet regionally and nationally together, the IF each year is the premier gathering together of people in our movement” added Alan (STC IRL Founder/Director and also Chair of the Board of Directors with STCi).

IF17 Berlin saw around 95 people gather from across the STCi movement, including many EU countries, Nepal, Mexico and USA. Those attending the IF are either actively involved in leading their STC volunteer-movement or are interested/starting an expression of STC in their local city. It’s a simple concept, a “serving revolution”, as expressed by Carlton Deal, Founder of STC Brussels and STCi. It’s mobilsing volunteers to “Cross the Line”, referring to many lines that exist within most global cities: the lines between the haves and the have nots; the rich and poor; black and white; upwardly mobile and the marginalised; homed and homeless…

“This [IF] is like a family”, said Greet (STC Maastricht). The IF is where our movement connects relationally and talks shop. We listen to one another, learn and encourage each other. Experts are invited to share on specific topics that build capacity across the STCi movement, like excellence in volunteer management.

With STCi becoming a formal legally constituted International Non-Governmental Organisation on 1 September 2016, three new Affiliated Memberships were conferred during this year’s IF (Sat AM). These national entities including Belgium, Ireland and Portugal have been a part of the movement from the early days in Brussels (2005). “This Affiliated Membership celebrates and reflects the reality and commitment in the hearts and minds for many years – now we are formally recognising their membership of STCi”, said Alan. “STCi membership is inclusive and open to eligible entities as either Affiliated or Associate Memberships.”

T-shirt day (Fri) is where each STC city wears their city’s STC T-shirt. While each maintains the STCi branding guidelines, there was a mass of different coloured and styled T’s, each representing the specific culture and fabric of the different cities. Some of these different T’s have been shared over the years and pictured below is Samuel (STC Lisbon) wearing a T from STC Galway (or Gaillimhe in the Irish language), alongside Alan and Ronan from STC Dublin & IRL. 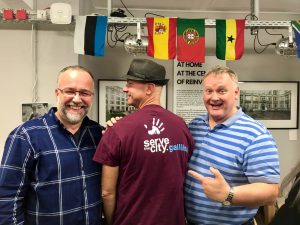 “STC Dublin has been asked to host the IF18, and accepted this honour. With the support of all our cities in Ireland [Galway & Cork currently active], we will attempt to match the high standards set in Berlin, in Dublin, in Autumn 2018”, said Alan.

#IF18DUB dates are 25-28 October 2018, so please mark these dates in your diary and plan to arrive during the day of the 18 October 2018 in order to make the Welcome dinner – you’ll not want to miss this or the following 2.5 days of sharing, caring, learning and workshops etc.

To see some video and the atmosphere at IF17 Berlin, please see links below. Might look like too much fun and dancing etc. but be assured, it is our global movements premier gathering as a “family” so lots of learning, growing and networking as well:

For even more pics and comments, see “Serve the City Berlin” Facebook Page.

Share this page
Please enter the Page ID of the Facebook feed you'd like to display. You can do this in either the Custom Facebook Feed plugin settings or in the shortcode itself. For example, [custom-facebook-feed id=YOUR_PAGE_ID_HERE].

By continuing to use the site, you agree to the use of cookies. more information